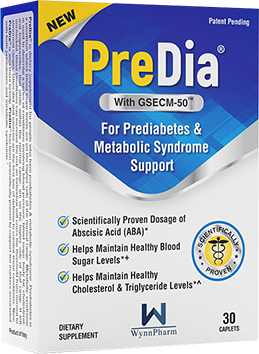 Apply to Become a Distributor

We're here when you need us!

An Overview of Key Study Findings with PreDia

Abscisic acid (ABA) is a terpenoid plant hormone with a molecular weight of 264.3 (Fig 1), extensively studied for several decades, that regulates the functional responses of higher plants to changes in environmental conditions, such as light, nutrient and water availability. 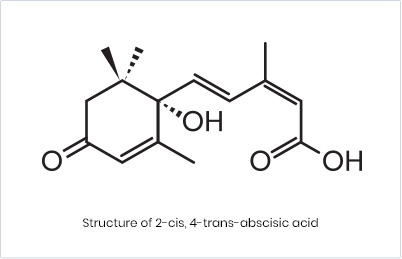 At low micromolar concentrations, ABA stimulates the typical responses of innate immune cells to biotic and abiotic (chemical and physical) stimuli, such as migration, phagocytosis, production of reactive oxygen species and release of inflammatory cytokines. This effect of ABA is in line with its apparent evolutionary conservation as a stress hormone from plants to animals. Interestingly, ABA has been detected in human plasma, although at concentrations several logs lower than those eliciting pro-inflammatory responses, i.e. in the low nanomolar range [65]. Moreover, it was demonstrated that plasma ABA increases after a glucose load in healthy humans, indicating that it is endogenously produced and suggesting a role for this molecule in the normal response to hyperglycemia [65]. Indeed, further studies in rodents and in humans have unveiled a hitherto unknown regulatory function of ABA in mammalian glycemia and lipidemia homeostasis [66] making ABA a new and attractive molecule for therapeutic interventions aimed at ameliorating hyperglycemia and hyperlipidemia, hallmarks of diabetes mellitus and the metabolic syndrome. The following is a brief summary of the main findings from pre-clinical to clinical studies regarding the effect of oral, low-dose ABA on glucose and lipid metabolism, which form the rationale for the proposed use of the new food supplement PreDia®, containing microgram amounts of ABA in its composition, for the reduction of plasma glucose and lipids, the control of body weight and the reduction of cardiovascular risk.

Discovery of ABA as an endogenous human hormone involved in glycemia homeostasis.

First, let’s recapitulate the original findings which suggested a role for endogenous ABA in human glycemia homeostasis. Bruzzone et al. observed that high glucose concentrations stimulated the release of ABA from β-pancreatic cells in vitro, providing the first indication of the endogenous cell source of ABA, together with the suggestion of the possible dysfunction of endogenous ABA release under conditions of β-cell failure, such as occurs in diabetes mellitus [67]. The concentration of ABA in plasma (ABAp) indeed increases in healthy humans (NGT) after an oral glucose load (Fig 2A), but not in subjects with type 2 diabetes (T2D) (Fig. 2B) and with gestational diabetes mellitus (GDM) (Fig 2C), the only type of diabetes that can revert to an apparently normal glucose tolerance, after termination of gestation.

Interestingly, one month after childbirth, both the fasting ABAp and the ABAp response to a glucose load were found to be restored to normal in the GDM subjects, along with glucose tolerance [68]. Finally, in obese T2D patients subjected to bilio-pancreatic diversion, a surgical procedure that dramatically reduces body fat and normalizes glucose tolerance, fasting ABAp was observed to significantly increase in all subjects one month after surgery as compared with pre-surgery levels, in parallel with a significant reduction of their fasting plasma glucose [68]. Altogether, these results strongly suggested a physiological function of endogenous ABA in the normal glycemic control and the diabetogenic effect of a dysfunctional ABA response (Figs. 2). 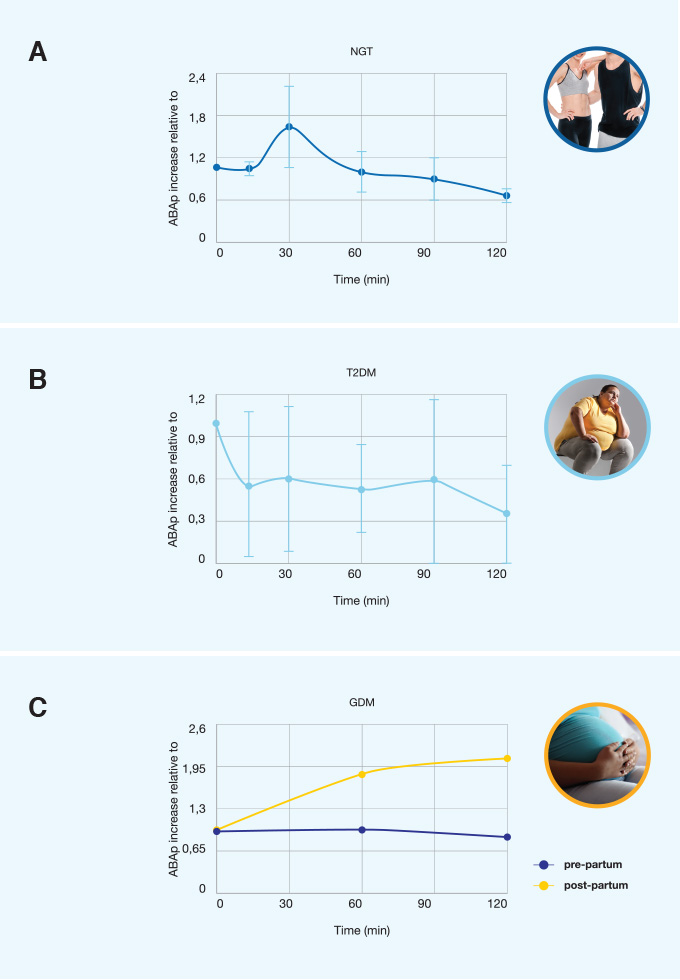 Physiological function of endogenous ABA in human glycemia control. Normal (A) and dysfunctional endogenous ABA response in T2DM subjects (B) and in subjects with gestational diabetes (C). These figures are adapted from Ameri P et al, PloS One 2015; 10(2):e0115992

In vitro studies further demonstrated that ABA stimulates glucose uptake by murine muscle cells independently of insulin, by increasing the expression and membrane translocation of GLUT4 [65], the glucose transporter predominantly expressed in skeletal muscle [2]. These results were confirmed in vivo, by means of micro positron emission tomography (microPET), in rats fed radioactively labeled glucose (18F-deoxy-glucose, FDG), without (control) or with a single dose of ABA at 1 µg/Kg/BW.

A two-fold increase of the muscle glucose uptake was measured in the ABA-treated as compared with the control animals in line with a similar two-fold increase of glucose blood clearance (Table 1). When muscle MRGlu are plotted against glycemia, values from the OGTTs with ABA are clearly separated from those obtained in the experiment without ABA, but both sets of data show an inverse correlation with glycemia (R=-0.64; p=0.014; not shown), indicating that the higher the muscle capacity for glucose disposal, the lower the glycemia values.

Finally, the percentage change in glucose disposal in muscle and whole body in the ABA-treated compared with the control rats shows a linear correlation (R = 0.85; p = 0.015; not shown), suggesting that whole body glucose consumption is indeed largely dependent upon the response of skeletal muscle to ABA (internal data).

MicroPET analysis of FDG disposal in ABA-treated and control rats during OGTT. Male Wistar rats were given an oral glucose load without (control) or with ABA at 1 µg/Kg/BW and 15 min later an i.v. injection of the radioactive tracer 18F-deoxyglucose to follow glucose fate by microPET. Mean±SD values of skeletal muscle glucose consumption (MRGlu) and of blood FDG clearance are shown. P values by unpaired t test.

Altogether, these in vivo results demonstrate that the glycemia lowering effect of ABA occurs via an increased muscle glucose uptake. The metabolic fate of internalized glucose in the skeletal muscle is in part its immediate oxidation, to provide metabolic energy, and in part glycogen synthesis, to allow storage of glucose for future utilization. Indeed, glycogen stores are significantly increased in mice treated with low-dose ABA (1 µg/Kg) for 5 weeks (Fig. 3A, unpublished internal data). The increased muscle capacity for glucose uptake in the ABA-treated animals is paralleled by an improved glucose tolerance, as demonstrated by lower AUC values of the glycemia profile after oral glucose load (Fig. 3B, unpublished internal data).

Increased skeletal muscle glycogen content and improved glycemia profile after glucose load in mice fed a high-glucose diet. Male CD1 mice (8 per group) were administered glucose with the drinking water without (controls) or with the addition of ABA at a dose of approximately 1 µg/Kg/BW for 5 weeks. (A) glycogen content in hind limb muscles, measured by enzymatic assay and expressed as mg/g tissue; *p

As a result of the improved ability of skeletal muscle to take up glucose from the bloodstream and to synthesize glycogen, an increased physical endurance in the ABA-treated animals compared with untreated controls is also observed: ABA-treated mice keep the wheel rotating for twice the time compared with controls, and travel approximately twice the distance at the end of a12-hours recording time (not shown). Altogether, these results indicate that chronic low-dose ABA treatment improves glucose tolerance and increases muscle glucose uptake and metabolism, also ameliorating muscle performance.

The glycemia-lowering action of microgram amounts of ABA is insulin-independent.

Insulin action is defective in diabetes mellitus, both T1D and T2D, because of an absolute or relative insulin deficiency. Thus, it is particularly important that the action of ABA does not depend upon an increase of insulin secretion. On the contrary, insulin levels to normalize glycemia decrease in ABA-treated animals, including humans.

In a seminal study published in the FASEB Journal, Magnone et al. [66] demonstrate that intake of an apricot extract containing ABA reduces glycemia during a standard glucose tolerance test in normal human subjects and in rats (Fig 4A, C); in the animals, no significant difference of the glycemia AUC is observed between a group treated with the ABA-containing extract and a group receiving synthetic ABA at the same dose contained in the extract (1 µg/Kg/BW) (Fig 4C).

Finally, in humans and rodents alike, ABA treatment resulted in a significant reduction of insulinemia, with a sparing effect on β-pancreatic cells (Fig 4B, D). In light of the stimulation by ABA on muscle glucose uptake (see preceding paragraph), the sparing effect on insulin is justified by the faster blood glucose clearance induced by ABA, resulting in a reduced stimulation of insulin-releasing cells. 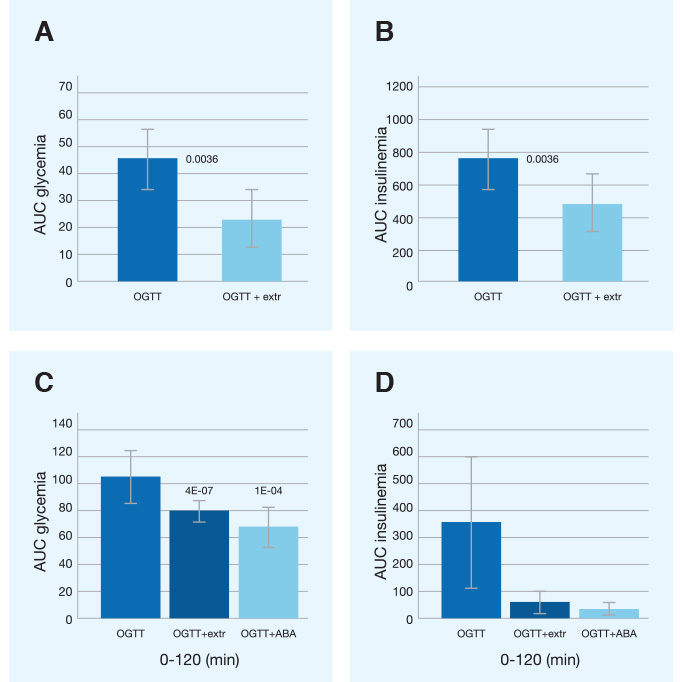 The glycemia-lowering action of microgram amounts of ABA is insulin-independent. Healthy volunteers underwent two different OGTTs, one without (OGTT) and one with an ABA-rich vegetal extract (OGTT+extr), yielding a dose of 0.85 μg ABA/Kg body weight. AUCs (0-120 min) of glycemia (A) and insulinemia (B) were measured on blood samples taken 15 min before (time zero), and 30, 60 and 120 min after intake of glucose. Three groups of male Wistar rats underwent to an OGTT: the glucose solution was administered without (OGTT) or with an ABA-rich vegetal extract (OGTT+extr) containing ABA at a dose of 1 μg/Kg BW, or with synthetic ABA at 1 μg/Kg BW (OGTT+ABA). AUCs (0-120 min) of glycemia (C) and insulinemia (D) were measured on blood samples taken at time zero (before gavage) and 15, 30, 60 and 120 min after intake of glucose. No significant difference of the AUC glycemia was observed between rats treated with the ABA-containing extract and rats receiving synthetic ABA at the same dose contained in the extract (1 µg/Kg body weight) These figures are adapted from Magnone M et al, FASEB J 2015, 4783-93.

The fact that the action of ABA on glycemia is insulin-independent is clearly demonstrated by the most recent results obtained on an insulin-defective mouse strain. Mice genetically defective for the receptor channel TRPM2 (TRPM2-KO), which is involved in glucose sensing in the β-cells, have a reduced insulin secretion in response to hyperglycemia (Fig 5A). Despite the severe deficit in insulin secretion during a glucose load, treatment of TRPM2-KO mice with oral ABA in the range of 0.5÷1 µg/Kg body weight results in a significant improvement of the AUC of glycemia during an OGTT (Fig. 5B) (unpublished internal data). 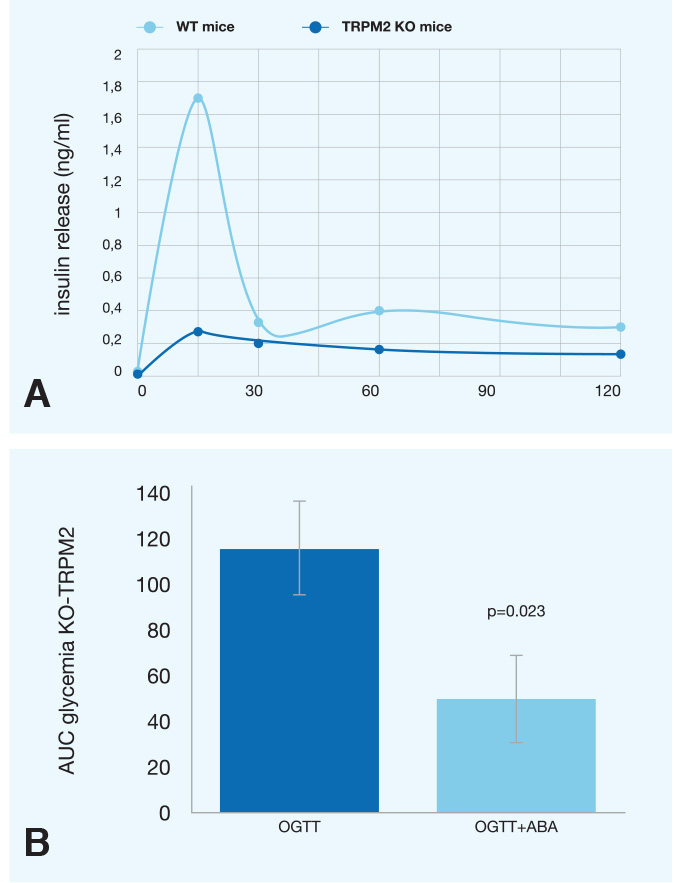 Oral ABA improves glucose tolerance in insulin-defective mice. Male C57 BL/6 mice (6 per group), wild type (WT) or knock-out for TRPM2 (TRPM2-KO) underwent an OGTT without (OGTT) or with ABA (OGTT+ABA): (A) profile of insulinemia; (B) incremental AUC of insulinemia TRPM2-KO during an OGTT; p values by unpaired t test.

In order to investigate the effect of the long-term intake of ABA, mice were fed for 4 months a high-glucose diet (by administering daily with drinking water 1g/kg BW of glucose), in the presence or absence (control mice) of 1 μg/kg BW of synthetic ABA (always administered daily with drinking water in combination with glucose). One week before the end of the treatment, an OGTT was performed on mice after overnight fasting and the incremental AUC of glycemia was significantly lower in the ABA-treated animals compared with controls (Table 2). At the end of the 4 months, blood levels of HbA1c%, cholesterol and triglycerides were all significantly lower in the ABA-treated mice compared with controls (Table 2). Moreover, the body weight gain was reduced by 25% in the ABA-treated animals compared with controls (Table 2). Altogether, the results achieved in the murine study indicate that chronic low-dose synthetic ABA improves glucose tolerance and lipidemia in rodents under a high-glucose dietary regimen (unpublished internal data).

Parameters detected in mice fed for 4 months a high-glucose diet in presence (glucose+ABA) or absence (glucose) of 1μg/kg BW of synthetic ABA.

DO YOU HAVE PREDIABETES?

Content is not intended to be a substitute for professional medical advice, diagnosis, or treatment.

×
* These Statements Have Not Been Evaluated By The Food & Drug Administration. This Product is Not Intended To Diagnose, Treat, Cure or Prevent Any Disease.